Lorna Patten on Today Extra | Aired 27 November 2017 | Expires 27 May 2018
The number of couples in their 50s and 60s getting divorced has increased by a third in the last ten years.

← Previous media: The rise of the 'silver splitters': Why more married couples than ever are calling it quits when they reach their fifties 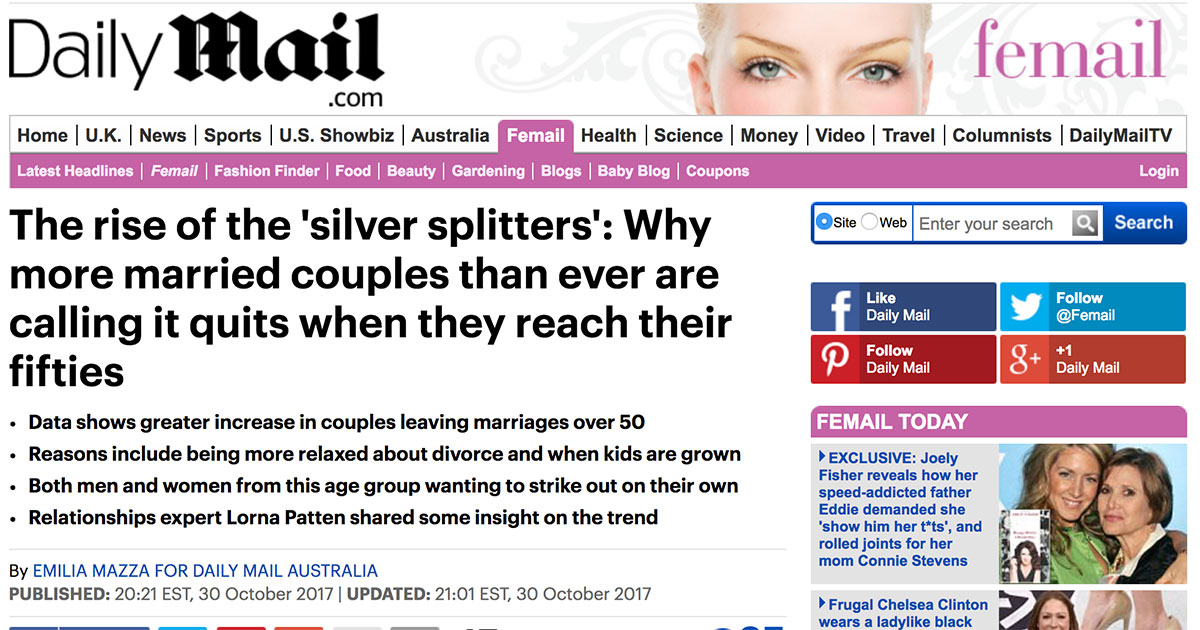 If you’re part of an older married couple, there’s every likelihood at this stage you’re both planning for a comfortable retirement – together.

And while this might be the case for some, other couples are hitting midlife ready to start afresh.

Australia, the United Kingdom and New Zealand all show divorce figures are on the rise, but both Britain and New Zealand are showing a particular new trend emerging: the rise of the ‘silver splitters’ – couples over 50s choosing divorce.

Data released by the New Zealand Relationship Property Survey shows that although over 50s made up just 14 per cent of family law cases, 60 per cent of 369 lawyers who responded (221 respondents) reported an increase in the 50 plus age bracket separating, according to the New Zealand Herald.

Divorce lawyer Jeremy Sutton told the publication people felt more confident divorcing after their children had grown, and because they were more financially secure.

‘People are saying, ‘We used to spend our time looking after our kids, now the kids have moved on, and we don’t have much in common and we have enough money, so I can be independent again.

In the United Kingdom divorce rates are also increasing, according to Britain’s Office of National Statistics.

In 2016, 106,959 opposite-sex divorces were granted. Of those seeking divorce the greatest increase was by those over 50, The Telegraph UK reports.

The data also revealed more men are looking to leave their marriages, and of all the divorces granted, 40 per cent were granted to men specifically.

And these weren’t newly marrieds looking to bolt either, with the average duration of marriage revealed to be 12 years, ONS figures show.

Australia is also showing signs that divorce rates are on the rise, according to information from the Australian Bureau of Statistics.

In 2015, a total of 48,517 divorces were granted, up from 46,498 divorces granted in 2014. Although the increase is less than five per cent, similarly to the UK, the average married couple is staying together for exactly the same amount of time.

Sydney relationship expert Lorna Patten shared some insight as to why those in long term partnerships may be choosing to call it quits when they hit midlife.

‘People make decisions about ending a marriage or partnership because of how they feel and how they want to feel.

‘By age 50, many have realised that it’s not only OK but also necessary to consider their own emotional needs as a priority instead of it only being about others involved,’ she said via email.

Lorna also believes because people expect to live longer than previous generations, it’s entirely conceivable for men and women to choose to strike out at this age.

‘The notion of staying in an unhappy or dysfunctional partnership forever is no longer seen as a viable choice.’

The coach said more and more people are choosing to make decisions about what they want for themselves, even when it means others won’t like it.

‘That points to a deeper sense of self-esteem and confidences that also comes with maturity,’ she concluded.

Read the original article at DailyMail.co.uk »